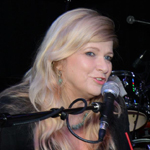 Vicky Hamilton is noted for managing the early careers of Guns N’ Roses, Poison and Faster Pussycat; for being a management consultant for Mötley Crüe and Stryper, a 1980s concert promoter on the Sunset Strip, and a club booker at Bar Sinister from 2001 to 2010.
Hamilton did A&R at Geffen Records from 1988 to 1992, worked at Lookout Management, at Vapor Records from 1994 to 1996, and as an A&R consultant at Capitol Records from 1997 to 1999. She started her own record label, Small Hairy Dog, in 1997, a joint venture with Risk Records in 1998. The only artist signed to the label was June Carter Cash whose album Press On won a Grammy Award for Best Traditional Folk Album in 2000.