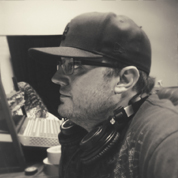 Scott Tolleson is a music video producer and co-founder of the SteamyintheCity Music Collective with his insanely talented photographer wife Kristina. Over the past few years they have collaborated with 30+ musicians and artists to create hundreds of music videos, photos, & live streaming concerts across a wide variety of channels and platforms.

They founded the SteamyintheCity Music Collective in the hopes of creating a way for artists to freely collaborate not only on music videos and photos, but on all manner of production, planning, promotion, & distribution required now a days to have a successful independent music career.

In July of this year Scott & Kristina successfully raised $3,000,000 to officially launch their 3,300 sq.ft. live streaming studio and collective headquarters in Long Beach, California. They are planning for a grand opening in early 2015 with live streaming concerts, creative workshops, and all sorts of new opportunities & tools for artists to collaborate, create, learn, and build their career as an independent artist.