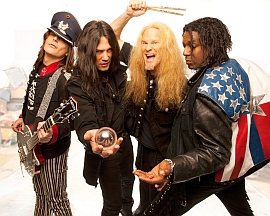 SNEW got it’s start November 2005 in Hollywood, CA. For a definition of Snew’s sound, how and why they do what they do, let it be said; bands like AC/DC, Motörhead, The Stooges, MC5, The Ramones, Alice Cooper, Led Zeppelin and Kiss perfected raw electrified monster rock and roll and the members of Snew took notes.

Snew’s debut album, released was June 2008, entitled “Snew You” was named one of the Top Ten hard rock albums of 2008 by SleazeRoxx.com and has continued to receive high praise from fans worldwide.

The third album “What’s It To Ya” has once again been produced by Owsinski and joining him this time is the legendary Ken Scott who recorded and mixed. Ken’s credits as a producer and engineer include the Beatles, David Bowie, Elton John, Pink Floyd, Devo, Supertramp, Alice Cooper, Mahavishnu Orchestra and a vast number of other classics in rock history.

We are proud to say SNEW has once again raised the bar with a little help from their friends.