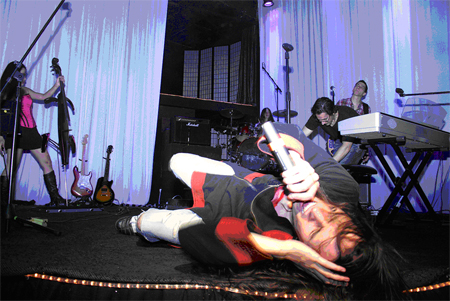 PRIVET EARTH! is your personal launch into the space of new sound.

PRIVET EARTH!” is a unique rock project founded by Ivan Smirnov in Los Angeles in 2007. Currently, the band is one of the top rated rock artists in the world, according to Reverbnation charts, in addition to having their songs on 2011 Grammy ballot for “The Best Rock Song” and “The Best Rock Performance”.

Born in Saint Petersburg, Russia, and raised in Vologda, a small city a few hundred miles from Moscow, Ivan Smirnov was heavily influenced by the American/British rock scene and started writing his own material in English at the age of 8, which made him unique early on. While studying classical piano for five years, Ivan also picked up interest in the guitar and by the age of 19 he had an independent, self-produced album under his belt. Inspired by legendary artists like John Lennon, Freddy Mercury, David Bowie, Axl Rose, and Russian classical composers, Ivan strived to immortalize his feelings in his music and create a new feeling of rock for his followers. Going international was always his dream.

This dream finally drove him to pursue his career nowhere else, but the entertainment capitol of the world. A few years ago, after traveling thousands of miles and facing many obstacles, he finally made it to Los Angeles! His explosive performances, unique vocal style and enormous talent quickly gained this Russian wonder respect among everyone who heard his music.

Music to Ivan is like a second blood that fuels his veins and with his uncanny stage presence and off the chart sound he has gained many dedicated fans in different parts of the world. PRIVET EARTH!’s self-titled debut album and the new ICE EP received 5 star reviews by rock critics and media all over the world…but this is just the beginning!..