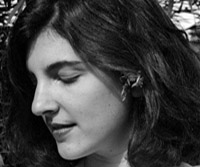 The modern folk music of The Leah Ray Mendez Trio is both organic and earthy in its heart-centered and homegrown California sound. Their songs connect the romance of our inner spirit with imagery of natural landscapes in a poetic and intimate manner. Blending the time-tested and classic combination of drums, guitar, and bass, Leah Ray Mendez and her band blend the past and future into the present with beautifully rich vocals, self-revealing lyrics, syncopated percussion, droning harmonium, and ethereally plucked harp. Their debut EP has been called “A creative folk music masterpiece.” [I Am Entertainment Magazine 2012].

A lifelong musician and dancer, the trio’s lead singer and songwriter, Leah Ray Mendez has been writing and performing original music professionally since her studies of World Music and Dance at the University of California, Santa Cruz, where she was trained in traditional western music theory as well as folk traditions found in diverse regions such as Indonesia, West Africa, and India

Bassist and guitarist, Mauricio Mendez, spent his early life living in diverse parts of the world from Saudi Arabia to Holland, but mostly grew up in his native Colombia. Son to a renowned llanera (Colombian folk) musician, Mauricio became the lead guitarist in popular Colombian rock bands “Hombre Común” and “Lola Vulcana,” and has been performing with Leah since 2005.

Percussionist and electronic specialist, Beau Silver, graduated from the University of Miami with a degree in Music Engineering with classical percussion as his principle instrument and currently works as a software engineer for the audio engineering company Euphonix, and is about to graduate from Stanford University with a MA in Music, Science, and Technology.

Currently, The Leah Ray Mendez Trio are performing throughout the California coast at festivals (San Francisco Free Folk Fest, Topanga Days), venues both large and small (The Resource Center for Non-Violence, Café Gratitude, Divinitree), on live radio (most recently KPIG & KKUP), and at private events (house concerts). After a Summer California tour, the trio plans to take their acts throughout the West Coast and Southwest.