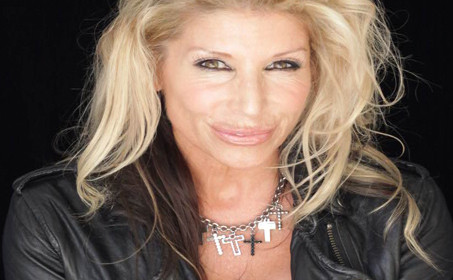 In hopes of fulfilling her musical dreams, Lorraine Lewis moved from Albuquerque, New Mexico to Los Angeles with the perfect vehicle for her boundless energy as the leader & singer of the heavy metal outfit, Femme Fatale. Fueled by Lorraine’s megawatt performances, Femme Fatale signed to MCA Records just months after their L.A. debut at the Whiskey A Go-Go. The band’s self-titled debut album yielded a spot on the Billboard charts and two popular, top 10 videos on MTV including “Waiting for the Big One,” and “Falling In & Out of Love.” The band toured with Cheap Trick, scored soundtrack slots for films like “License to Drive,” “Don’t tell mom the babysitter’s dead” and the TV series “MacGyver.”

Fast forward 25 years and Lorraine Lewis is still the singer of a recharged, all female version of Femme Fatale – is enjoying a renewed popularity because of a resurgence in 80’s rock and has carved out a career for herself in the reality tv business. Lewis is the co-creator & executive producer of reality tv series “Ex Wives of Rock” which just wrapped a 3rd season, 54 episode run on Canada’s Slice Network & 2 seasons here in the U.S. on Fuse TV. “Ex Wives of Rock” is Slice’s number one non-scripted show to date. Lewis currently has 3 shows in development, & has produced 5 sizzle reels in the last 12 months. Her company LPL Productions is currently pitching 3 new shows, one of which was co-produced with Morgan Freeman’s company, Revelations. In addition, Lewis has just launched a new t-shirt, accessory line called Rock and Roll Vending, which donates a portion of every sale to animal rescue.