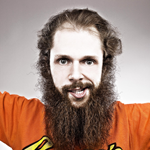 Producer Songwriter multi instrumentalist Frederik Thaae has been making a name for himself winning a Danish Grammy for his own album and producer of the Eurovision awards winning song “Only Teardrops” in 2013. As a result of winning the Eurovision songwriting competition Only Teardrops went to #1 in over 11 countries.  Not only does Frederik produce pop songs, this classically trained artist has scored movies and tv shows.  He has appeared as  a coach on the Danish version of the voice and musical director for the Danish version of X Factor.  Frederiks productions have sold in the millions.