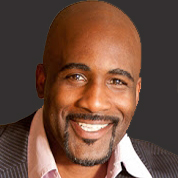 DAMIAN LOVE
Originally from Sacramento, Damian Love, founder of “The Program LA”, a Talent Branding Consultant and Media Strategist, has been getting talent on the right track for years. Mr. Love has a wealth of success to draw upon from a very successful sports & entertainment career. In track and field, Mr Love was a professional triple jumper, where he qualified for two Olympic trials in 2000 and 2004. He made it to the top 10 indoor nationals in 2003 and received numerous accolades of national titles out of college, along with a long list of accomplishments. Upon retiring from his successful career as a professional athlete, Mr. Love turned his sights to Hollywood.

Damian Love created and was executive producer of “Funniest Comic in the City”(FCIC), launched at the world famous BB Kings Blues Club in Universal City. FCIC, the comedy competition brought out some of the funniest up & coming comics in the country. He also created and was executive producer of “SNE Rhythm Nights”, one of the hottest R&B shows in 2009. Some of the hottest R&B celebrities and athletes from the around the country attended and participated. As a producer, he developed an extensive knowledge of talent and social media, and discovered that he was ideally suited to assist new as well as seasoned talent in the entertainment industry reach higher levels in their career. Drawing upon his 15 years experience in personal development training for corporate executives, professional athletes, and entertainers, he began The Program LA.